June 2021 marked the 51st celebration of Pride Month. And it has been epic. While last year was a mostly virtual affair due to the pandemic, loosened restrictions saw people gather for festivals, parades and a whole lot of Pride-related fun. Let’s look at the best (and worst) of Pride Month 2021.

Celebrating the progress of the LGBTQ+ community is always important. We must never forget the struggles of our fellow members of the community who have struggled to come to terms with their identity and have finally come out of the closet – more colorful than ever! Yes, maybe there were times that therapy (similar to https://www.privatetherapy.com/services/lgbt-issues-and-questions-of-identity/) might have been involved, but, it did help them know and accept themselves better at the end of the day!

Last month, though, was about pushing for change. Campaigners want to see conversion therapy outlawed rapidly. And better advice, guidance and medical support for trans people has also been highlighted. Pride in London are also pushing for an AIDs memorial to remember those who died from the virus and those who cared for them. Support is growing for the movement, with more and more rainbow flags being seen each year. If you’re thinking of flying the pride flag for the first time this year, take a look at best rated residential flagpoles available so that you can fly it high in the sky along with everyone else!

Top brands have been waving the rainbow flags too and supporting Pride through innovative, creative and unique campaigns. This is important considering:

There’s undoubtedly power in Pride Month marketing. It’s important for employees and consumers to see top brands supporting the LGBTQ+ community. But there are marketing challenges to be aware of. For instance, a one-off Pride campaign can fall flat if there’s a lack of inclusion or representation throughout the rest of the year.

Brands also need to be firmly aware of their core values and have genuine support for the Pride community or they risk a whole host of negative PR. A Popular Information investigation, for instance, found that 25 major corporations have spent more than $10 million supporting politicians that undermine LGBTQ+ rights as well as decision-makers who have sponsored anti-trans legislation.

Bank of America is one such brand under fire this year for contradictory marketing. They’ve a rainbow logo on Twitter. But it’s alleged that the brand funded senators committed to blocking the Equality Act from becoming law. Similarly, while claiming to oppose anti-LGBTQ State Legislation, CVS Health has also been allegedly supporting Senator Ralph Hise, the primary sponsor of S514 which has been described as ‘the most repressive anti-transgender health care bill in the nation.’ The legislation would ban anyone under the age of 21 from receiving gender-affirming treatment, including reversible hormone therapy. Hmmmmm better to say nothing? 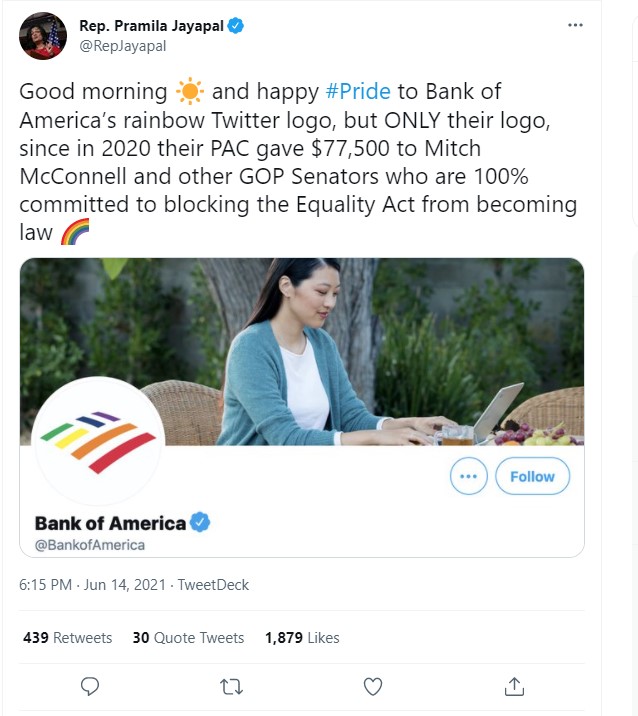 The best Pride marketing campaigns are not contradictory. They also don’t piggyback off the campaign for increased exposure. In fact, to go anywhere near Pride marketing, it’s important to:

#1 Lead by example – employ a diverse workforce, campaign for equal rights throughout the year and not just during Pride Month and showcase inclusive content across channels. You could also work with LGBTQ+ influencers and advocates or collaborate with companies who have a long history of supporting Pride.

#2 Put your money where your mouth is – donate to LGBTQ+ organisations and stay away from political donations which conflict your Pride marketing messages.

#3 Attend events – it’s all well and good flying the Pride flag across social media. But showing your face at Pride-related events adds a more genuine level of commitment. Your involvement can be celebrated in many different ways from LIVE videos to blog posts.

Brands Getting it Right

While the inconsistency of many top brands is, quite frankly, shocking – there are companies that have nailed Pride Month and are getting things just right. So, let’s throw out the negative, get our sparkle on and check out the very best of Pride Month 2021.

#1 Kellogg’s – Together With Pride

Despite its conservative and somewhat odd roots (Google Dr. John Kellogg), the Pride campaign from Kellogg’s this year is genius. The brand has released a limited-edition ‘Together With Pride’ cereal in collaboration with GLAAD to celebrate that no matter who you are, who you love or what pronouns you use, you are too awesome to fit into a box. The cereal consists of raspberry-flavoured rainbow hearts dusted with edible glitter and the marketing slogan reads, ‘Boxes are for cereal, not for people.’ Love. It. 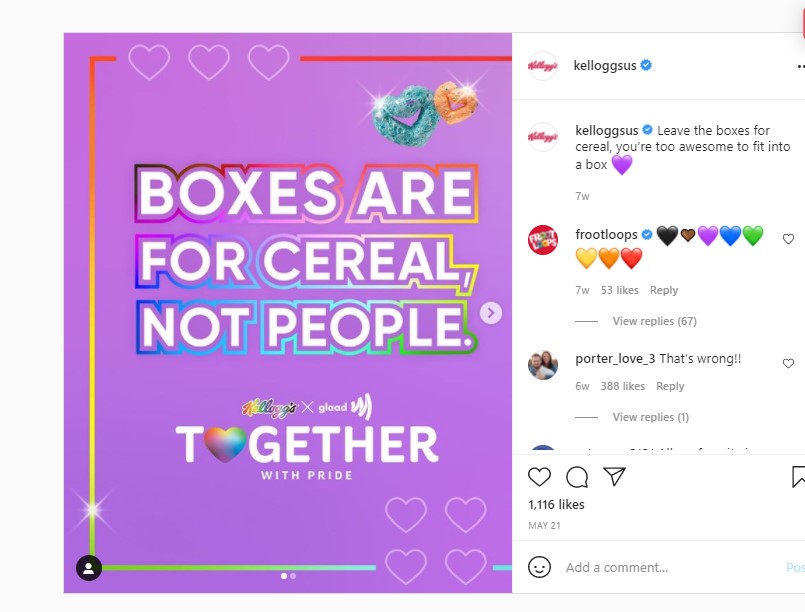 “Kellogg is not only building on an ongoing commitment to support the LGBTQ+ community, but initiatives that spotlight the importance of using correct pronouns to create safe and welcoming spaces for trans and nonbinary people.”

Top tip for marketers: Form long-lasting collaborations with organisations that have the same values and beliefs. From there you can focus on creating campaigns around relative topics. Staying up-to-date with the latest LGBTQ+ issues and progression is a must if you want to be a part of impactful conversations.

SodaStream has this year teamed up with actress and social justice advocate Laverne Cox for a campaign that centres specifically on the personal stories from queer communities. Anchored by a beautifully animate short film titled Rainbow Story, the company aims to amplify stories of personal triumph while promoting its limited-edition sparkling water kit of the same name which comes with a drawable surface. 10% of the proceeds will be donated to ILGA World, an international non-profit organisation that regularly petitions for LGBTQ+ rights. 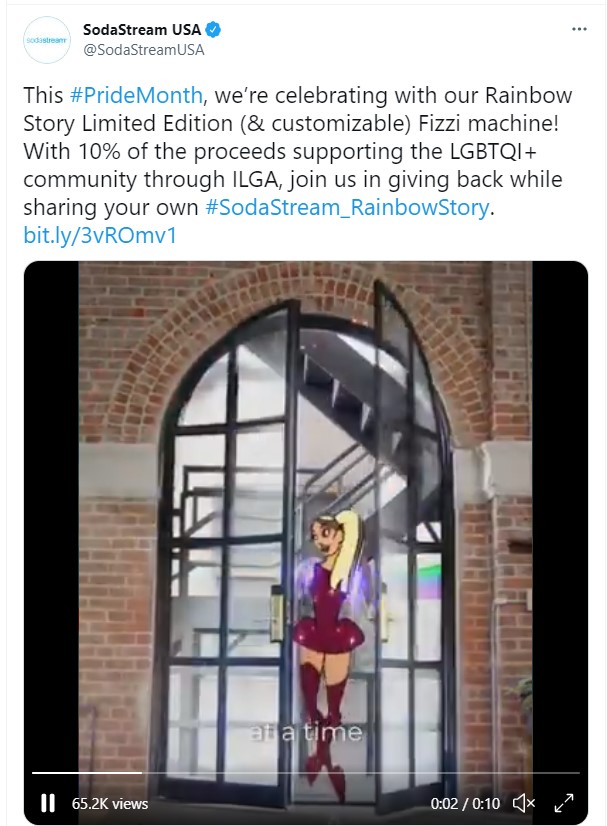 Top takeaway for marketers: Make the most of hashtags, tag all collaborators and influencers for improved brand awareness and don’t forget those all-important discounts, offers and incentives. Launching a limited edition product is also a great way to create FOMO as people won’t want to miss out.

#3 LEGO – Everyone is Awesome

Over the past few years, the LEGO Group has seriously ramped up its messages of diversity and inclusion across its corporate policies, advertising, social media and even related media like The LEGO Movie franchise. But until now, LEGO hasn’t released a LEGO set that fully embraces and celebrates the company’s myriad of LGBTQ+ fans and employees, including people of colour. The good news is you can now get your hands on an Everyone is Awesome set which features 11 colourful mini figures with a rainbow backdrop built from 346 pieces. The limited edition set was made available on the first day of Pride Month 2021. I have to say these are so cool!

“I wanted to create a model that symbolises inclusivity and celebrates everyone, no matter how they identify or who they love,” said Matthew Ashton, LEGO’s vice president for design who developed the limited-edition set.

Top tip for marketers: Be sure to recognise user generated content by tagging the relevant people as this will help to develop a strong community. Keep a look out for relevant content you can share to your own channel too with the help of social listening tools. LEGO’s VP of design used his own Twitter account to show gay icon Leslie Jordan building the Everyone is Awesome set that he designed. What a great way to get even more exposure.

Pride Month is technically over but it doesn’t need to be. Inclusive marketing should be year round and that’s something we can discuss anytime. What was your favourite Pride 2021 Campaign? Let me know what your favourite campaigns have been. What should brands do differently next year? Tweet me @Charli_Says and let me know.