The Best Brand Responses of 2020

It’s not what happens to you, but how you respond that counts, right? 2020 has been an offbeat year of lockdowns and civil unrest but how did brands respond to some of these unprecedented events? I’m taking a fun end of year look at the best brand responses of 2020.

If you didn’t hear about this story at the time, then buckle up because this is perhaps the funniest thing that happened in 2020. It all began with a seemingly innocuous tweet from President Trump on November 3.

Now, say the name ‘Four Seasons’ and most people think of the luxury, international hotel chain that does indeed have a branch in Philadelphia. Most people don’t think of ‘Four Seasons Total Landscaping’ — a landscaping company that’s also based in the city.

It was just a few minutes later, presumably with the Four Seasons hotel finding themselves inundated with phone calls from reporters and journalists, that they were compelled to tweet the following.

With everyone now positively bewildered and left wondering if a presidential campaign press conference was truly going to be held at a garden landscaping company, the President himself cleared things up with this tweet, which originally quoted his previous tweet.

Almost immediately, Trump then decided to start afresh with his announcement, tweeting the full, correct name of the landscaping company and with a slightly later time than originally planned.

So, it was true — the press conference really was going ahead at Four Seasons Total Landscaping. To most, even Philadelphians, this venue was completely unheard of. It’s located in Holmesburg, largely an industrial area with an odd mix of businesses that share little in common except a postal code. The landscaping company is sandwiched between an adult bookstore and a crematorium.

Here it is — Four Seasons Total Landscaping in all its glory. At least they covered up most of that garage door with campaign signs. 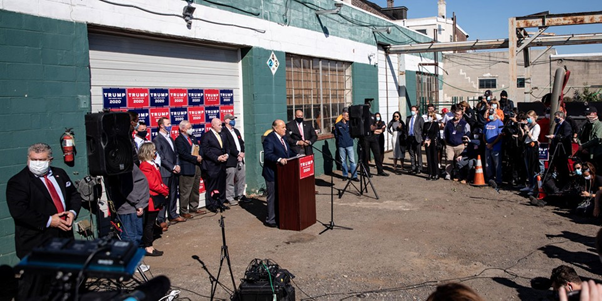 Now, one of the popular (and hilarious) explanations for this curious choice of venue is that somebody in Trump’s team booked the wrong Four Seasons and that when it came to the day-of, it was simply too late to make other arrangements. That left them forced to hold the press conference in the parking lot of a small landscaping company on the outskirts of the city.

In the immediate aftermath of the press conference, Four Seasons Total Landscaping was thrust into the media and public spotlight in a way they could have never expected. Some of the outpourings were positive, but much of it was negative — with stern democrat supporters angered that the business allowed the republican team to hold their conference on their land. The first statement on the matter was issued by the business the following day. 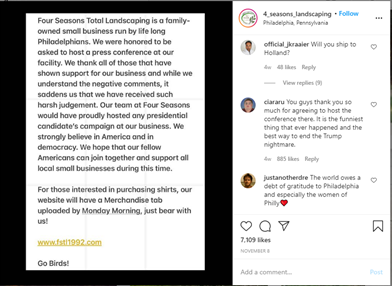 The statement worked to rid the company of much of the backlash they had been facing, and from then, the focus was largely on the humorous aspect of the whole situation.

The landscaping company could have chosen to quietly fade back into relative obscurity but this would have been a lost opportunity. The owners seized the moment and began selling Four Seasons Total Landscaping Press Conference merch that proved immensely popular. 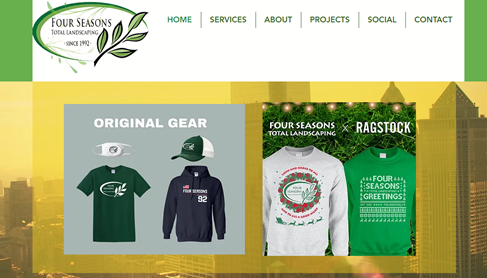 It was back in March of 2020 that the UK began to fall short of things like masks, PPE, and hand sanitiser were dwindling. BrewDog was quick off the mark to announce that they would begin transforming their supply of spirits into hand sanitiser.

The sanitiser was then to be donated to the NHS and charities across the nation to help get supplies to people in need.

Notice how the design is consistent with their usual branding. It’s eye-catching, intriguing, and shows BrewDog in a positive light. Shortly after this, the co-founders of the company announced they would be forgoing a salary for the year 2020 to protect jobs across the business. BrewDog’s announcements were perceived incredibly well by their audience and the company made national news for their philanthropy.

“A brand doing good out in the community will enjoy a positive secondary impact.” Kye Parkin, Communications Executive at BusinessWest, says, ‘BrewDog has seized upon the current pandemic as an opportunity to do something good and presumably strengthening its brand reputation in the process.’

With the death of George Floyd on May 25, 2020, advocates of the Black Lives Matter movement were energised and many people all over the globe took part in protests against police brutality and systemic racism.

As many social movements are, the BLM movement has been strongly politicised. This can make things tricky for big brands who risk alienating large sections of their audience. However, this time around, most brands had enough sense to realise that continuing to post their regular content, or not posting at all, would be tone-deaf. Ben & Jerry’s sent out their first statement relating to the killing of George Floyd on June 3. 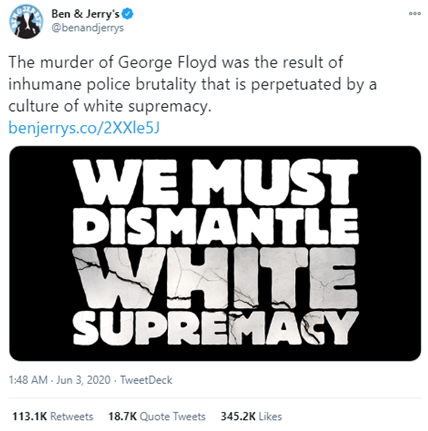 The brand’s response was fairly prompt, they took a strong stance, and their views aligned with the majority of their audience. The public’s response was largely positive.

Ben & Jerry’s certainly fared better than others, whose stances were brought under scrutiny because of an apparent misalignment between these and their company ethos in the real world. Take, for example, L’Oréal Paris USA who tweeted the following. 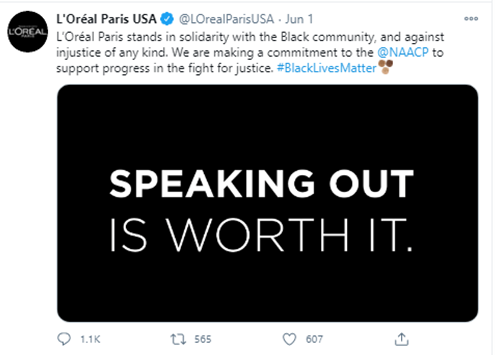 This tweet is doubly-flawed in that for one, implementing their brand slogan ‘Because You’re Worth It’ into a statement in response to the death of George Floyd is graceless and overly-commercial. Secondly, L’Oréal has been called out in the not-so-distant past on issues of anti-blackness. The post was soon flooded with outraged responses. 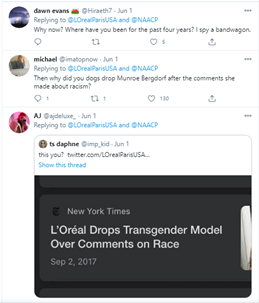 So why was the reception of Ben & Jerry’s BLM post so much better? Well for one, the ice cream company is no stranger to sharing strong opinions on social matters, with many, often liberal-leaning statements on their website and social media platforms — their audience already knows what’s up. They also have less of a controversy-littered past to contend with so their message comes across as sincere. As business writers for Bloomberg, Jordyn Holman and Thomas Buckley say, ‘[Ben & Jerry’s] has largely managed not to be regarded as opportunistic—of using social consciousness to increase sales.’ Here were some of the responses to Ben & Jerry’s post. 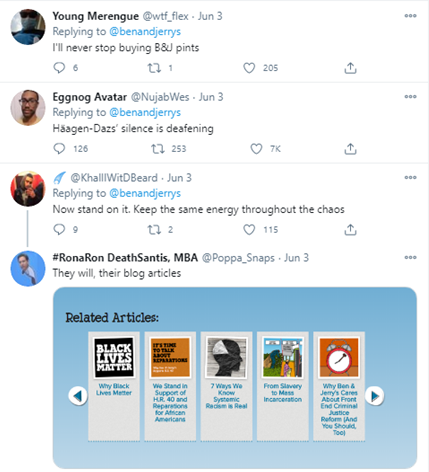 Back in August, actress Reese Witherspoon shared a collage of images of herself from various films she’s starred in which were intended to signify her feelings about each month of the year so far. 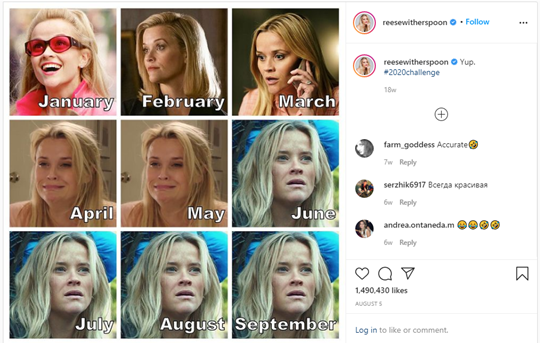 Things start off great. In January she’s channelling her inner Legally Blonde Elle Woods. By the time June rolls around though, she’s transformed into the muddled and agitated character of Cheryl Strayed from Wild.

Witherspoon signs off her post with #2020challenge, in an apparent bid to encourage fans and other celebs to join in. Some brands didn’t want to miss out on the opportunity though. Budweiser’s response was particularly popular (perhaps something a lot of us can relate to here?) 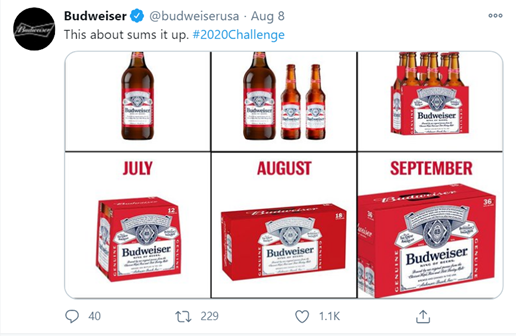 For some consumers, the relationship with brands is purely functional eg- “I need baby wipes and these are the cheapest so I will buy them.” But increasingly for many, a brand’s values and purpose contributes to the buying process eg “I will pay 5 cents more for these baby wipes because they don’t harm the ocean.” 50% want brands to showcase genuine care for consumers, whilst 40% want consideration for the environment. When it comes to showing support for equality and diversity, 1/4 of consumers said they want to see this from brands. And it’s the youngest segment who are particularly enthusiastic about this, with 1/3 of Gen Zs and Millennials saying so. A word of warning though, don’t brag about supporting a cause if you don’t put your money where your mouth is. Similarly, don’t jump on trending hashtags if you don’t have anything valuable to contribute.

I loved these brand responses which prove yet again that community engagement and listening on social media is key. What was your favourite? Tweet me @Charli_Says and let me know.