Social Media and Mental Health in 2020

Boo you 2020! From forced lockdowns, social distancing and masks to race riots, high-profile celebrity deaths, bush fires and a controversial election. It’s not been the year we planned. But how are we coping? Well, it seems social media has been a huge go-to. From specialist social media for physicians to enable them to connect and share ideas to the astonishing rise of TikTok and the various challenges that have spread on the platform, there are so many platforms out there for people to get on board with. Plus, with tensions running high and people being stuck at home, it’s perhaps no surprise that screen-time has soared. The question is, are we happier ranting, chatting and posting online? Or is there a darker side to these social platforms we need to be aware of? And how about those poor social media managers? Perhaps people need to consider getting some kind of assistance if the current state of the world is getting too much for them – many are turning to Bud By Mail options as we all have to stay at home. We may be jumping to conclusions though, so for now let’s look at social media and mental health in 2020.

Social Media Usage 2020 – The Stats You Need to Know

Social media is huge. That’s clear to see. But are we damaging our mental health by checking for notifications and updates multiple times a day? Let’s take a closer look at the good, the bad and the ugly of being socially connected in 2020.

Social media can be a positive force as reported by mental health charity, Mind. In a document entitled How has the Coronavirus Impacted our Mental Health “knowing others were going through the same thing” was cited as helpful, making people feel less alone when they were facing mental health challenges through lockdown. Social media played a key role in enabling this. 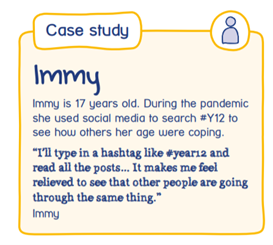 Social media has also allowed people to keep in touch with loved ones during difficult lockdown situations. Indeed, with regards to looking after our mental health during the pandemic, Mind recommends keeping in touch digitally stating:

“If you can’t meet up with people or groups you’d like to see in person, make plans to video chat instead. You can also arrange phone calls or send instant messages or texts.”

And the stats show this has been happening:

Social platforms like Instagram even introduced new features to try and promote healthy and social habits during the pandemic. Co-Watching, for instance, lets your browse posts with your friends over in-app video chat. The feature can be accessed by starting a video chat through the Instagram direct messaging tab and tapping the photo icon in the bottom left of the video chat screen. It lets you look at saved, liked and recommended posts together as a group in a bid to eliminate that mind-numbing feeling of isolation. 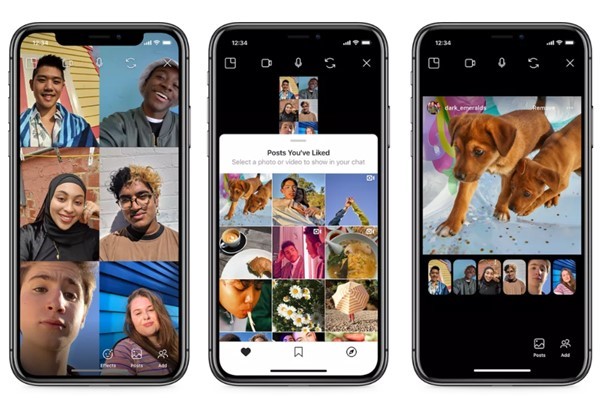 Another advantage of social media is that it facilitates awareness and provides mental health support by making resources available to those facing distress caused by lockdown and to those who are isolated as a result of being quarantined. 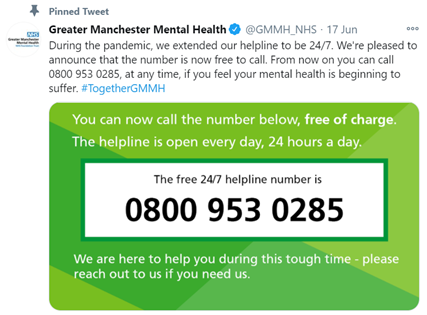 Social media is also an information vacuum spreading both knowledge and information at an exponential rate. Real time peer-to-peer exchanges have allowed communities to self-organise and respond to situations. The #ENDCHILDFOODPOVERTY campaign fuelled by Manchester United star Marcus Rashford is a great example of this. When the government refused to support children receiving free school meals throughout the school holidays, businesses from across the UK pulled together to make sure little ones had something to eat. This essentially led to a government U-turn and 170 million of extra funding. The money will pay to support families over the season while the Holiday Activities and Food programme will be extended to cover the Easter, summer and Christmas breaks in 2021. 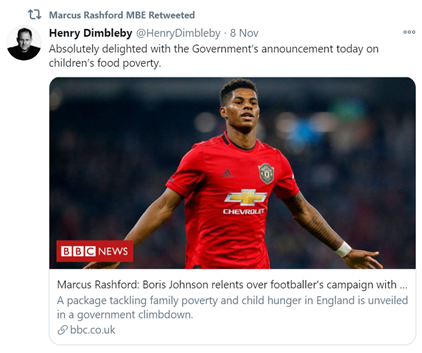 This social media campaign has a direct link to the mental health of people struggling to feed their kids during a pandemic. Also, seeing good news on social media during such dark days can lift spirits and make people feel more socially united.

Some good things undoubtedly come from social media. But it’s not all fun and games. In fact, social media has shown to negatively impact our mental health in numerous ways.

Let’s face it, there’s not been a joy in 2020. But do we really need to have our faces rubbed in it the whole time? Do you constantly want to feel the criticism of your body weight? Can social media dictate how much weight you should weigh, what clothes you should wear, or what exercises you should do? If yes, then you might be spending half of your savings on Binge Eating Therapy itself! Social media might be filled with information, but it’s also increased our intake of negative news. From scare stories about hospitals running out of beds to death tolls, we’ve been bombarded with doom and gloom! In fact, the term ‘doomscrolling’ has been used to describe the mind-numbing scrolling and almost compulsive consumption of negative media.

Indeed, a third of all young women in the UK are suffering from anxiety and depression, government figures suggest, as experts blame the 24/7 nature of social media. It’s also been shown that for every 1 hour increase in time spend on social media and for every additional media source consulted, there was a 0.14-point increase in mental distress. So, with people stuck at home consuming way more media than they ever might have before, their mental health can take quite a knocking. You can also come across instances of people seeking psychological help or relying on medical cannabis products (read this guide on CBD oil UK law for further clarification), assuming it is legalized in the country where they reside in order to ease their stress and anxiety-related troubles.

Hate speech is also not a nice thing to have to deal with online. Since the day after George Floyd’s death on May 26,2020, the rate of hate speech online in the US, as tracked by one digital measurement firm, has been nearly three times higher than normal. On June 3, at the height of the nationwide protests, DoubleVerify, which uses its own technology to scan pages online so advertisers can avoid objectionable content, says instances of hate speech were more than 4.5 times higher than usual – the highest-ever rate it has measured to date.

In general terms, online hate speech can cause direct and indirect effects on individuals’ psychological wellbeing, short and long-term, with the amount of damage significantly bigger in cases of victimisation, compared to witnessing. 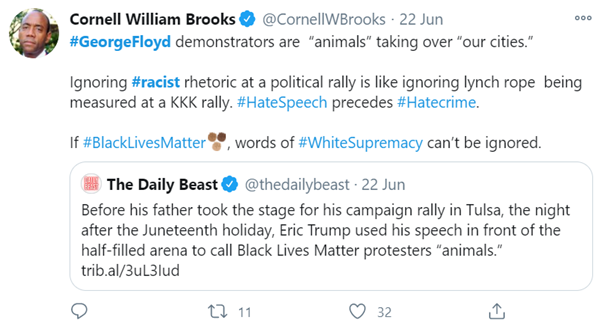 The constant consumption of hateful and negative rhetoric on social media is tedious, tiresome and not good for mental health. But let’s get even uglier.

According to a new study by researchers at Pennsylvania State University and Jinan University in Guangzhou, China, social media use during the pandemic is a predictor of symptoms of depression and secondary trauma. The study, published last month in Computers in Human Behaviour, surveyed 320 participants living in Wuhan (the epicentre of the initial Covid-19 outbreak). It looked at how respondents accessed and shared health information with friends, family members over WeChat. They also used a stress scale to measure anxiety and depression by asking participants to rate statements such as “I felt that life was meaningless” and “I had disturbing dreams about the coronavirus epidemic.”

Bu Zhong, a journalism professor at Penn State and study co-author, said the team looked into the effects of social media use on people’s mental health right after Wuhan was locked down to curb the spread of the coronavirus. It revealed more than half of the respondents reported levels of depression with nearly 20% suffering moderate or severe depression .With social media usage contributing to more severe depression according to structural equation modelling (SEM).

Researchers said that it was possible that people who consumed more health information on WeChat – China’s most popular social network – attached excessive importance to the content, experiencing more depression and secondary trauma than those who used the platform less. In response, they recommend social media breaks during a stressful health crisis such as the pandemic.

Co-author of the study Bu Zhong said, “We should not blame social media. We should just pay attention to how we are using it.”

Let’s not also forget that social media has been accused of ‘spreading conspiracy theories.’ A study by Kings College London revealed “there was a strong positive relationship between use of social media platforms as sources of knowledge about Covid-19 and holding one or more conspiracy beliefs. YouTube had the strongest association with conspiracy beliefs, followed by Facebook.” But who is right and who is wrong? Are those questioning the pandemic actually conspiracy theorists or truth tellers? Another study, funded by Oxford Health BRC revealed:

Such a jumble and overload of information combined with fake news can lead to anxiety and confusion. 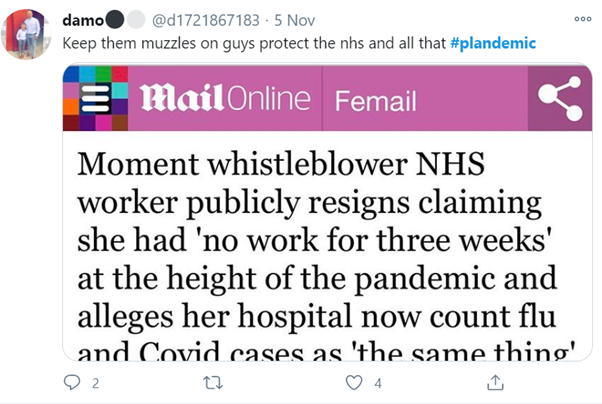 Twitter is showing that many of us are sad and depressed with Sunday May 31st being revealed as the saddest day recorded by the Computational Story Lab of the University of Vermont in the last 13 years. Or at least, the saddest say on social media.

This was discovered by the Hedonometer, a device which measures word choices across millions of tweets, every day, the world over, to come up with a moving measure of well-being. Since 2008, the Hedonometer has gathered a random 10% of all public tweets, every day, across a dozen languages. The tool then looks for words that have been ranked for their happy or sad connotation, counts them, and calculates a kind of national happiness average based on which words are dominating the discourse.

On May 31, the most commonly used words on English language Twitter included “terrorist,” “violence” and “racist.” This was about a week after George Floyd was killed, near the start of the protests that would last all summer.

Since the beginning of the pandemic, the Hedonometer’s sadness readings have set multiple records. This year, “there was a full month – and we never see this – there was a full month of days that the Hedonometer was reading sadder than the Boston Marathon day,” Dr. Danforth, brainchild of the Hedonometer said. “Our collective attention is very ephemeral. So it was really remarkable then that the instrument, for the first time, showed this sustained, depressed mood, and then it got even worse, when the protests started.”

Of course, the rise in online and social media activity has provided an unprecedented opportunity to monitor how people are feeling. Social media provides a real-time platform where people often candidly self-disclose their concerns, opinion and struggles making it a very interesting medium of study.

What do you think about social media and mental health in 2020? Send me a tweet @Charli_Says and let me know your thoughts.