‘How did that even get signed off?’

These are all common reactions to controversial marketing campaigns that have been released over the past few years, with the so-called ‘accidental’ f*ck up becoming increasingly common.

First on the chopping board is H&M. How they failed to spot that a black boy modelling a hoodie with the slogan ‘Coolest Monkey in the Jungle’ could be seen as racist is mind-blowing. But they did fail. And the ad aired anyway. 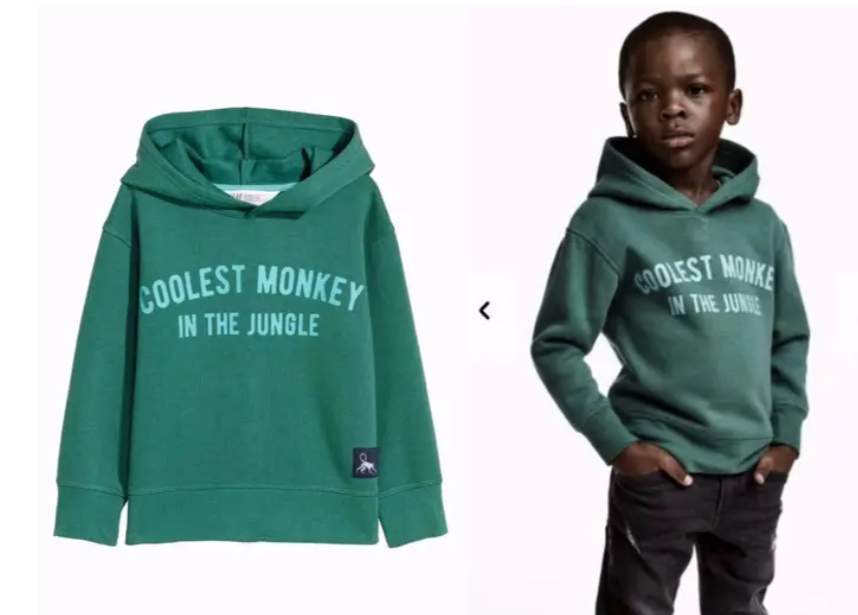 While getting all eyes on your brand through controversial advertising is not always a bad thing (more on that later), it’s essential to tread extremely careful – as H&M found out. In the months following #Hoodiegate which caused understandable social media backlash, H&M earnings took a huge hit. As reported by Bloomberg, the world’s second largest clothing retailer had piles of unsold clothes worth more than $4 billion which, combined with increased competition for affordable seasonal wear, left H&M struggling.

The Swedish brand issued the following statement at the time:

“We have got this wrong and we agree than, even if unintentional, passive or casual racism needs to be eradicated wherever it exists.”

Shortly after, the company appointed its first ever global leader for diversity and inclusiveness, Annie Wu, who at the time of the scandal was the global manager for employee relations. Speaking of one of the world’s biggest PR disasters, Wu said;

“I think for all of us it was more shock, like everyone else: how could that happen? But then also, how do we then tell the world that this is not who we are, and that it was completely a mistake?”

So how did H&M push forward? Well, firstly they acknowledge their mistakes with an apology admitting there was simply ‘no excuse for it.’ The brand also:

Top Takeaway: Controversial marketing without intent or any kind of social awareness can be extremely bad for business and a stringent sign-off process is needed to avoid a PR backlash. If an incident does occur, admitting your error and apologising for it is the first step. It’s then important to focus on being better and making improvements.

H&M is far from being the only brand that’s embraced controversial marketing somewhat unknowingly. There was also Dove who showed a black woman turning into a white woman after using their products. The 3-second video clip, posted on Dove’s US Facebook page reminded some social media users of racist soap ads from the 19th century or early 20th century which showed black people scrubbing their skin to become white.

This also led to an apology from the brand and put a severe dent in Dove’s Real Beauty campaign which aimed to embrace people of all shapes, sizes and ethnicities. 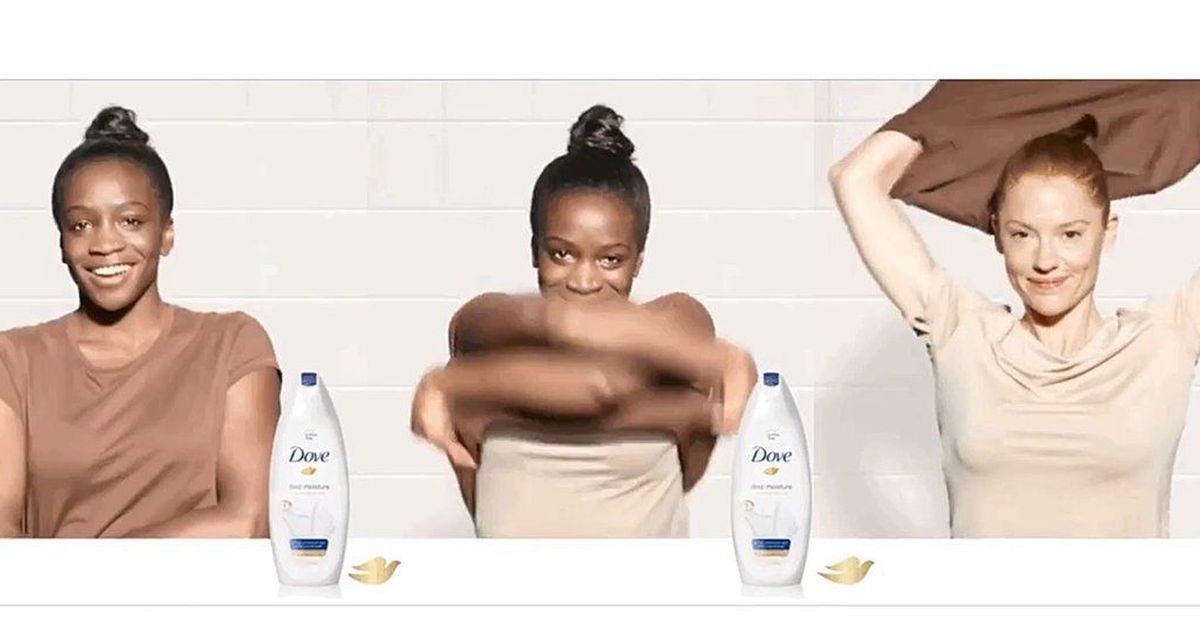 Sadly for Dove, the ‘racist’ ad wasn’t the only time their advertising has been seen as controversial. Over excited discussions in the boardroom might have had something to do with the body-shaped bottle disaster that was designed to physically represent diversity.

“From curvaceous to slender, tall to petite, and whatever your skin colour, shoe size or hair type, beauty comes in a million different shapes and sizes. Our six exclusive bottle designs represent this diversity: just like women, we wanted to show that our iconic bottle can come in all shapes and sizes, too.” 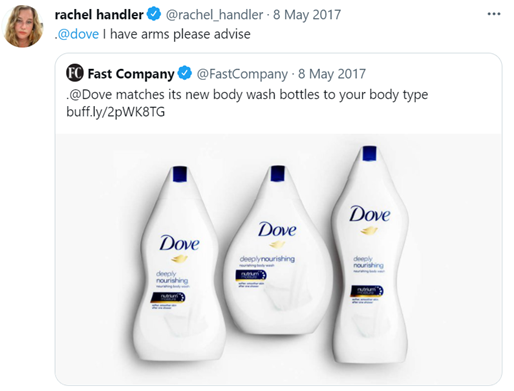 Top Takeaway: When it comes to product launches, it’s a good idea to carry out thorough market research so you can find out how the public feels about your idea. A simple poll on Facebook or an email questionnaire could have saved Dove a lot of heartache and PR recovery. Generally speaking though, people don’t like to be categorised or stereotyped.

While some brand walk into controversial marketing without even knowing it, others act with intent. In recent years we’ve seen many companies actively take sides regarding high-profile issues, using their platforms to communicate important messages. So who has been ruffling feathers intentionally?

Nike is no stranger to controversy. The sportwear firm has run advertising featuring Lance Armstrong after a doping scandal, Maria Sharapova following a failed drugs test and Tiger Woods in the midst of a sex scandal. But selecting Colin Kaepernick, an outcast American football player and civil right activist, as the face of the brand’s 30th anniversary ‘Just Do It’ campaign seemed to be the most divisive move yet. 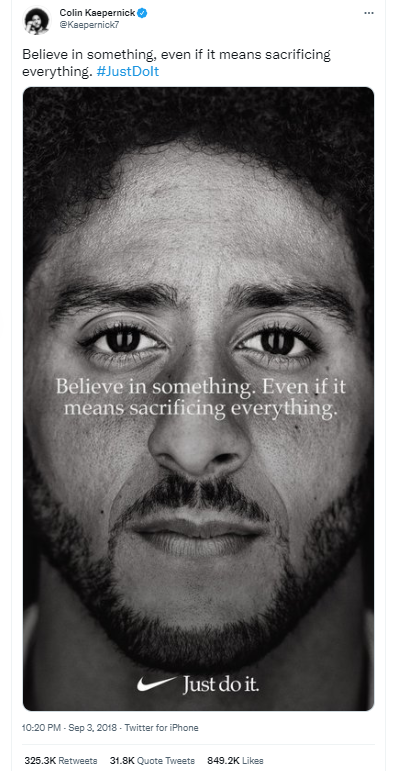 Since 2016, Kaepernick had made headlines when he refused to stand during the national anthem, instead choosing to take the knee. This protest was intended to draw attention, he said, to police killings of African Americans and other injustices and has become a symbol of the black lives matter movement in sport. Nike used Kaepernick’s plight to create a new marketing message which read, “Believe in something. Even if it means sacrificing everything.” This very much showed that Nike was aligning itself with the taking the knee movement.

“We believe Colin is one of the most inspirational athletes of this generation, who has leveraged the power of sport to help move the world forward. We wanted to energise its meaning and introduce ‘Just Do It’ to a new generation of athletes.”

No sitting on the fence there then.

So, what happened next? Well, as people boycotted the brand and performatively destroyed their Nike gear on social media, Nike’s stock soared enjoying a 5% increase since Labour Day. The day it was announced that Kaepernick would be the star of Nike’s 30th anniversary Just Do it Campaign. Indeed, reports suggest the controversial move made Nike a whopping $6 billion.

Top Takeaway: If you launch into a controversial topic, expect backlash. Not everyone will agree with you which is why you need to have a crystal clear view of what you want to achieve and create slogans to match your vision. Nike’s goal was to introduce a new generation of fans to the Just Do It slogan. This slogan is all about determination and being resolute in your mindset and Kaepernick’s strong-mindedness resonated with Nike.

Another brand unafraid of controversial marketing is Cadbury! To launch their new 2021 Golden Goobilee egg which marks five decades of the fondant-filled chocolate egg, the brand launched an ad which nods at all the different ways a crème egg is eaten. From the lickers to the bakers, everyone is featured and at the end it says ‘Sharers? We’re down with that.’ It’s at this point where a real-life gay couple are seen spinning around before biting into either side of a crème egg together. 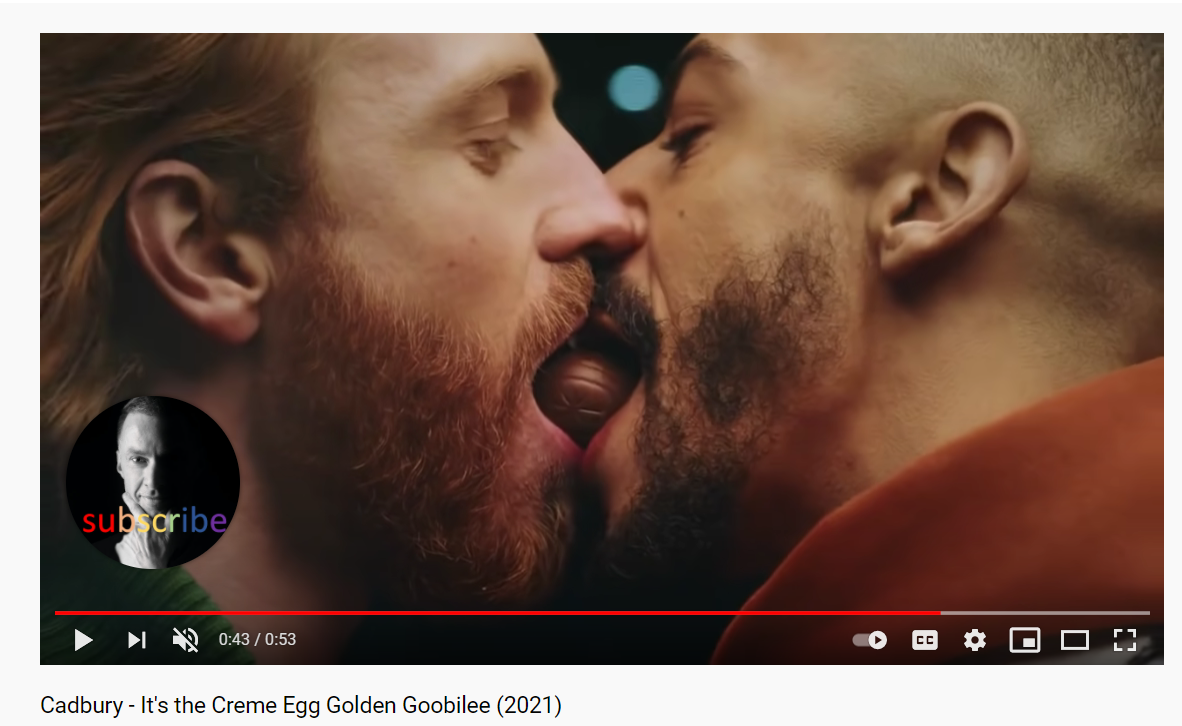 While 25,000 people signed a petition to ban the ad for both LGBTQ+ discrimination reasons as well as sexual objectification and religious concerns (say what?!), the Advertising Standards Authority said it would not take further action on complaints against the advert as ‘no advertising rules has been broken.’

Standing firmly by the creative, Cadbury released a statement which read:

“Cadbury has always been a progressive brand that spreads a message of inclusion, whether it’s through its products or brand campaigns. We are proud of our Golden Goobilee advert which celebrates the many ways that everyone can enjoy a Cadbury Crème Egg. To illustrate this and showcase the joy our products bring, a clip of a real-life couple sharing a Cadbury Crème Egg was included in the advert.”

My view? I have no issues with two guys sharing a Creme Egg but they really aren’t big enough to be shared. Note to selves Cadbury – make Creme Eggs bigger! Or special edition jumbo Creme Eggs? Just a thought!

Top Takeaway: Stay true to who you are as a brand. Inclusive marketing is becoming the norm, with huge brands like LEGO releasing their first every LGBTQ+ Everyone is Awesome set in time for Pride 2021. Of course, there are some advertising guidelines to follow and it’s important to acknowledge these to avoid a slap on the wrist or wasted advertising budgets. For instance the ASA makes it clear that:

“The ASA sometimes receives complaints about ads which depict or imply homosexuality because a complainant believes that depictions of homosexuality in themselves are offensive. The ASA will not uphold if a complainant finds an ad offensive purely for depicting homosexuality.” However, marketing communications must not contain anything that is likely to cause serious or widespread offence. This includes depicting people from the LGBTQ+ community in a derogatory or disrespectful light.”

Whether or not an ad is considered to be offensive will also depend on the tone and execution of the ad. The ASA, for example, received two complaints about a TV ad for pot noodle which depicted a male actor playing the character of a WAG, dressed in women’s clothing. The complainants challenged whether the ad was offensive and encouraged discriminatory behaviour and treatment towards transgender people. The ASA considered that this ad was likely to be interpreted as a mockery of the WAG culture, rather than of transgender people, and that it was unlikely to cause serious or widespread offence.

When shaving company Gillette waded into the trending #MeToo movement, they receive both praise and scorn. Unapologetically condemning toxic masculinity, the brand switched their famous slogan, ‘the best a man can get’ for ‘the best men can be’ in a bid to encourage men to be the best versions of themselves and shun negative behaviour.

The star-studded advertisement featured news clips of reporting on the #MeToo movement, as well as images showing sexism in films, in boardrooms and of violence between boys, with a voiceover saying: “Bullying, the MeToo movement against sexual harassment, toxic masculinity, is this the best a man can get?”

The film, called We Believe: The Best Men Can Be immediately went viral and has to-date received close to 40 million views on YouTube alone. 4 million of those in the first 48-hours. While many people thought it was an anti-men campaign, others suggested it was more pro-human. 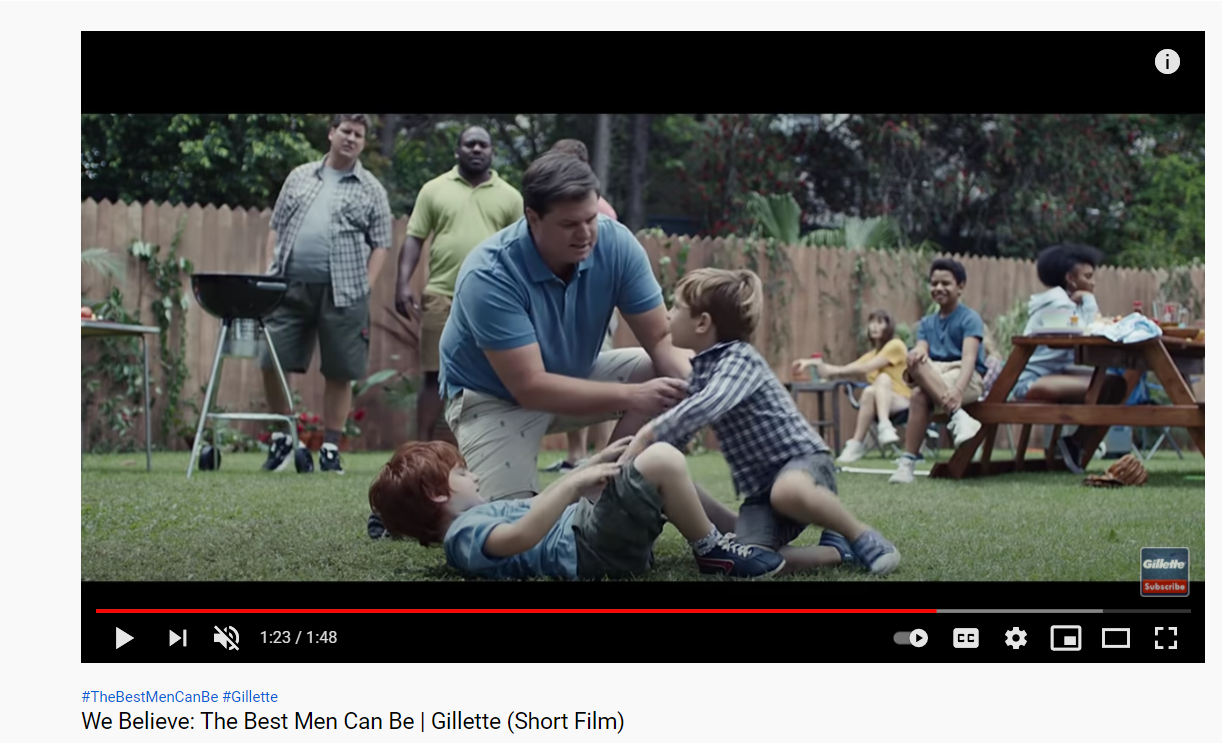 While sales didn’t drop or rise following the ad, Gillette were happy with their controversial marketing approach stating how the ad was “part of our effort to connect more meaningfully with younger consumer groups.”

Top Takeaway: Keep your target audience and branding in mind. Running a campaign that can go viral might be good for the short term but will it alienate your core demographic? I don’t believe that happened here, or that Gillette was wrong. But it’s worth remembering that a few moments popularity might not be worth a drop in sales revenue.

Controversial isn’t always a bad thing. Many brands are willing to take a stand on things they believe in and are unafraid to rock the boat. This is a brave form of advertising and one that can get people talking and help shed light on important issues. What’s the most controversial marketing technique you’ve seen? Tweet me @Charli_Says