From the Lush ‘Anti-Spy Cops’ campaign which resulted in a #FlushLush social media crisis. To the forced removal of a United Airlines passenger that caused a scandal across the web. It’s clear that online backlash can and does happen. The internet is incredibly unforgiving and while the examples just mentioned are particularly extreme cases of brands shooting themselves in the foot, any company can make an error. And pay for it within a few seconds. News travels fast now technology is involved.

The question is; how do you recover from a PR mistake? Here are my 10 top rules of PR crisis management:

Trying to argue your way out of an already bad situation simply won’t work. In fact, it could damage the credibility of your brand further. So, take responsibility and issue a public apology if necessary. Remember when KFC ran out of their most prized ingredient? Chicken! Admitting they messed up with a side-helping of humour helped to get their fans back on side. Never ever delete comments. This is a massive PR fail which will push angry commentators to other channels where you cannot respond. 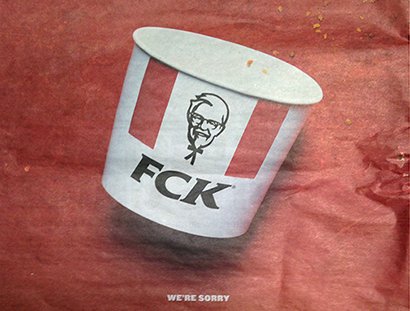 Essentially, you want to nip bad press in the bud as quickly as possible. So, don’t wait around.  Instead, be transparent and proactive. Acknowledge the incident and respond to it properly ensuring you’ve issued a statement, wrote personal apologies and reached out to your fan base across all social channels. Explain your plan of action and how you will get back on your feet. Then do it! Today’s gossip will quickly become yesterday’s news.

#3 Mean what you say

A sorry-not-sorry approach simply won’t do. If you sound like a robot writing an automated apology, people will get mad. Similarly, if you try to shift the blame or feel like you’re addressing the issue with a gun forced against your head, it won’t got down well. United Airlines is one brand accused of mishandling its response to videos of a passenger being dragged off one of its flights.

The company’s first response was to totally overlook the seriousness of the situation, simply announcing, “we apologize for the overbook situation.”

Check out the full timeline of responses here as documented by The New York Times.

#4 Be careful with your wording

Consumers can see right through a disingenuous apology. So, either do it properly or expect a further onslaught of complaints. If you’re going to write an apology that seems to mean well on the surface but instead skirts around the issue of taking full responsibility it will get noticed. When Dove faced backlash for their video add which showed a black woman transforming into a white woman after using soap, the company said this:

Great, an apology, right? Scratch below the surface, however, and it seems to be more of a textbook non-apology. Instead of acknowledging the mess up, Dove brushes off their PR disaster as missing the mark. And rather than admitting the campaign itself was offensive, they said they ‘regret the offense it caused.’ This is somewhat side-stepping guilt whether they intended to or not. It’s all in the words!

The online world moves at a rapid rate. One minute you may be the star of the show. And the next, you’re falling over on the red carpet. No matter how well your social strategy is going, always stay on high alert and be on the look out for negativity spikes. This is particularly important during a PR crisis when your team needs to be monitoring all social channels and implementing a documented recovery strategy. At the very least, everyone should know who’s to respond. And it’s a good idea to have predetermined, approved key messages that can be sent out while you analyse the issue further.

As mentioned, a PR crisis plan is a must. Of course, you never quite know what’s going to cause a public outcry. But being poised for anything helps and that means communicating with your team in advance, so everyone knows the drill if things start to kick off. What you absolutely must not to is let colleagues ‘go rogue’ and start posting whatever they like to social channels. This could add fuel to an already raging fire, particularly if they’re not social media experts.

#7 Confer with your PR team

If your company’s going down the pan online, it can be tempting to jump on a laptop and start shooting off responses. But wait. While prompt action is key, always talk to your PR team first to work out the best approach. Hopefully you’ve already put a PR crisis management process in place. But if not, taking some time to fully understand the situation and how to respond is key.

Humanising your brand and talking in a warm, comforting tone can be a good recovery technique. But there’s a fine line between explaining your situation calmly and patronising consumers. What’s more, avoid emotional, frenzied responses. If you’re the CEO of a family-run company, for example, it can be heartbreaking to see bad comments, but you must compose yourself before publishing a statement on social. Remember the Amy’s Bakery saga? Let’s not go there. 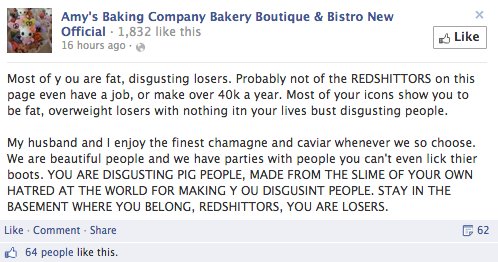 Many brands have three or more social media channels these days. This makes it increasingly important to be consistent. Don’t say one thing on Facebook and another on Twitter as this will look highly disorganised and unprofessional. In cases like this, it’s best to keep things incredibly simple so there’s no room for confusion.

Don’t fall into a state of corporate despair and start shutting down your accounts or going completely silent. Always reply to comments and face your PR crisis head on. Then, move onto the next campaign and work hard to rectify your brand image. People tend to remember the last thing you did, which is why regular creative content is so important.