The Best of Women’s Month Marketing in 2021

Home / The Best of Women’s Month Marketing in 2021

It’s Women’s History Month. This annual month celebrates the achievements of women everywhere and raises awareness about gender inequality. Reflecting on how far women have come while acknowledging areas that still need to be improved is vital in helping to close pay gaps and support female-led initiatives. As the Creative Director of Contentworks, a women led content marketing agency, this is something I can relate to. I’m taking a closer look at why women’s month is important. Also what’s cool behaviour and what isn’t by the big brands. Let’s review the best of women’s month marketing in 2021. 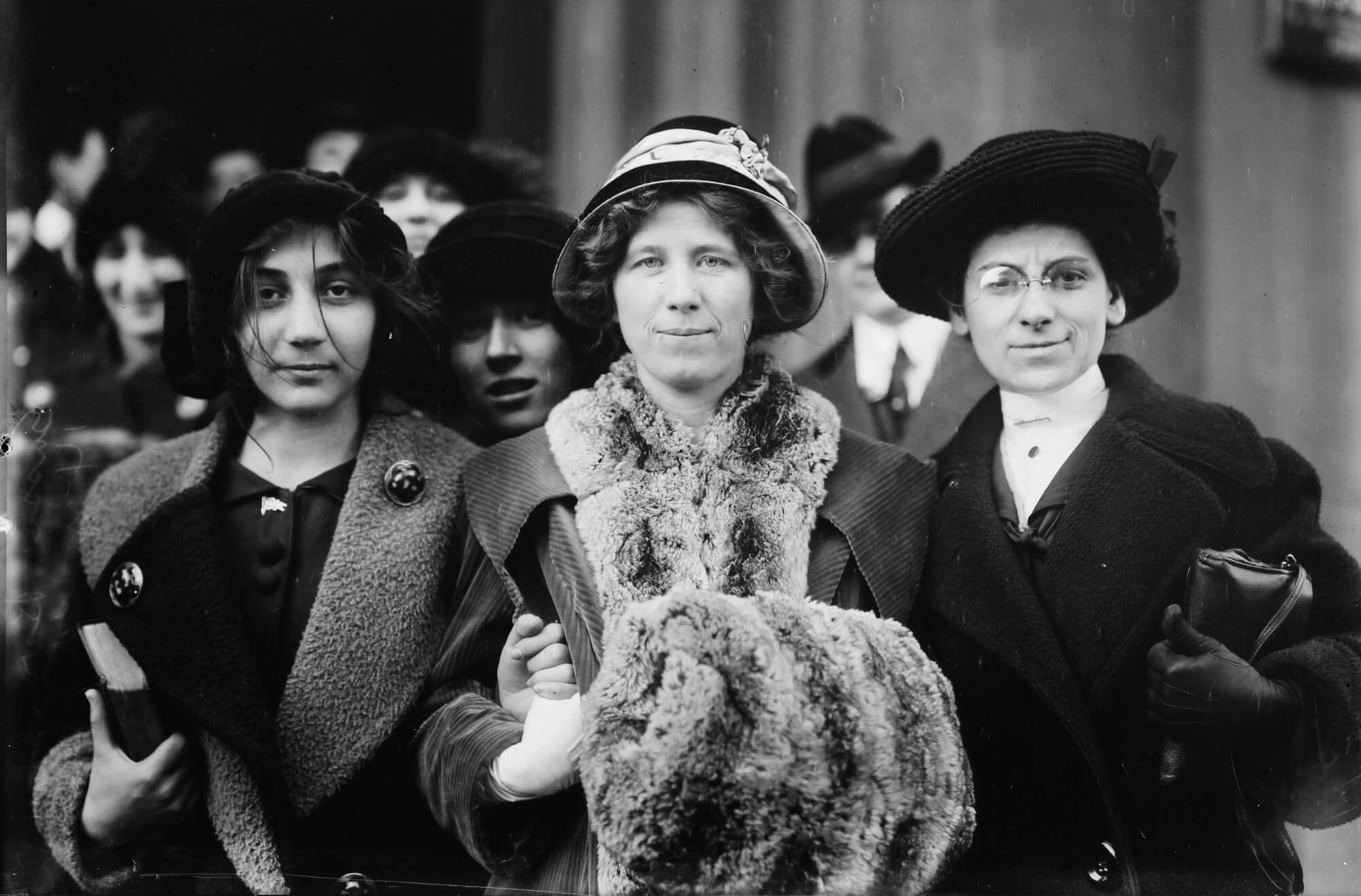 Why Should We Care About Women’s History Month?

It’s easy to dismiss Women’s Day and Women’s History Month as a fad or just another commercial stunt. But if you think the world is fair for women. It’s not. ‘Choose to Challenge’ is this month’s mantra which recognises the need to call out gender bias and inequality. And the stats around this topics really do speak for themselves. 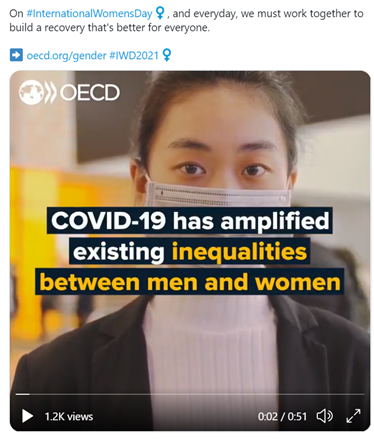 It’s clear that Women’s History Month and the initiatives and campaigns around it are very much needed. So what’s going on in the marketing world?

Let’s start with my pick of what isn’t cool on Women’s Day or Women’s History Month. 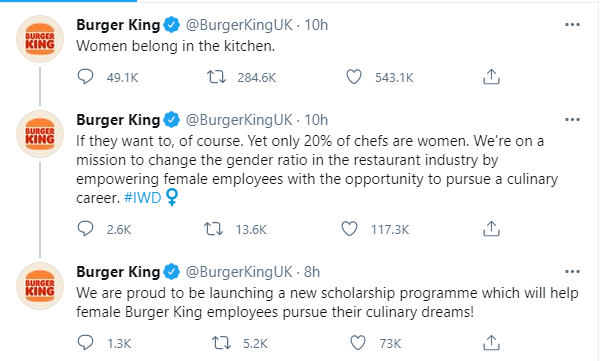 It’s one thing having fantastic products, it’s another recognising that these products are possible thanks to an incredible workforce of women. L’Occitane En Provence is this year celebrating their ongoing admiration and support for the women in Burkina Faso who produce the brand’s incredible shea.

In honour of International Women’s Day (8 March 2021), L’Occitane launched a new Solidarity Hand Cream of which 100% of the profits will be donated to finance NGO projects to promote women’s leadership in the land-locked West African country. In the United States, L’Occitane will also be donating to Black Women’s Heath Imperative, supporting black women’s health and empowerment programs in the nation. 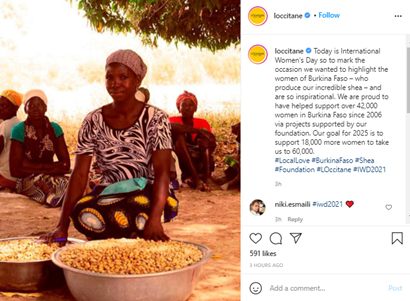 Why this campaign works:

Top tip for brands: Embrace storytelling. This might mean going behind the scenes of a particular product or documenting the history of your brand’s origins. Pull out details that are unique to your product such as the ‘women’s gold’ description mentioned above.

This year, L’Occitane UK has also put influential women from their own brand in the spotlight. From Warehouse workers to those in the Head Office, L’Occitane has fully embraced the meaning of respecting hard working women across the workforce. 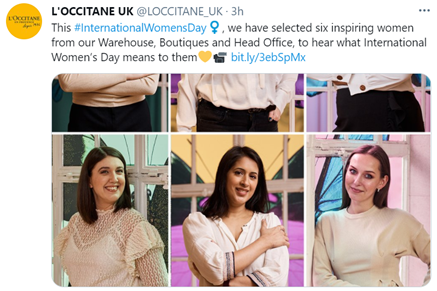 Top tips for brands: For Women’s History Month and beyond, you can share the success of female staff via video clips, host a question and answer session with female leaders or get members of your team to rundown what they do on a daily basis for social media. You never know who your content will empower.

According to data analysed by the National Women’s Law Center, every single one of the 140,000 jobs lost in the United States in December 2020 belonged to a woman. Excuse me? This shocking statistic was a ‘breaking point’ for the leadership at Secret Deodorant leading to a partnership with YWCA to tell stories of the women weathering the economic fallout of the pandemic. As well as raising awareness of the issues impacting women through a docuseries called Secret Superhero Moms, the powerhouse duo has pledged $1 million to support more than 100,000 women and their families with childcare, workforce development and barrier reduction. 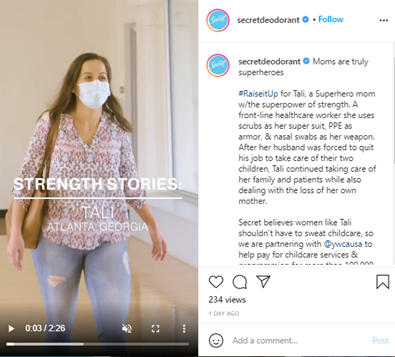 This campaign is effective as it:

Female-founded dating app Bumble is leading by example this Women’s History Month by hosting a series of high-profile interactive events. This included an International Women’s Day Clubhouse chat with women trailblazers and Bumble leaders about women at work and what still needs to be done for women to thrive in their relationships and careers. Women don’t want to stop their careers for a full and loving relationship, so knowing how to juggle that whilst still feeling feminine is essential, from splashing on some pheromones perfume to knowing how to manage a boardroom, each one has a place in a woman’s everyday life and there shouldn’t be a compromise. 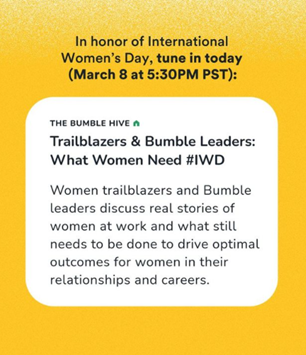 Social media networks like Clubhouse facilitate audio-only, invite-only chats which allow users to listen to and join in discussions of interest. It’s a network which Bumble is now using to their full advantage to discuss female-related topics and push for greater equality. The company announced their Clubhouse initiatives via Instagram where they already have a following of 563K. Considering Bumble is a women-led brand that has an equitable gender representation within their C-suite with 54% comprising of women, Women’s History Month is a great chance for some thought-provoking marketing.

Bumble also got tongues wagging with their First Movers Club initiative. This celebrates women from all walks of life across centuries and generations who didn’t believe in sticking to the rules. Bumble put the spotlight on women such as suffragette Alice Paul and America’s first black, female self-made millionaire Madame CJ Walker by creating a series of fact-driven articles. These were bang on trend with the Bumble brand and allowed the company to use content to their advantage without being overly promotional. 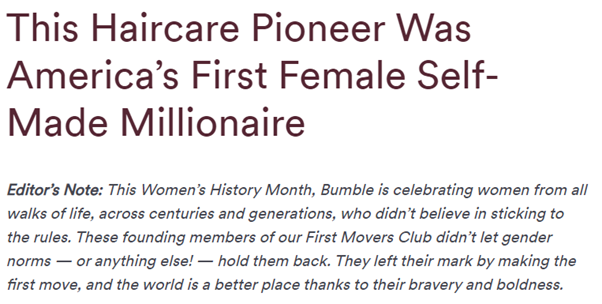 This article series is great because it:

From keeping work going during lockdowns to home schooling kids, women had a lot to navigate in the past year. To reward their hard work, Boots teamed up with Estée Lauder to host an Instagram competition. This encouraged followers to nominate a woman who they thought deserved to win 1000 of cosmetics. The instructions were to tag a woman, like the post and follow both Boots and Estée Lauder on Instagram. Pretty simple right? And a great example of brand collaboration. 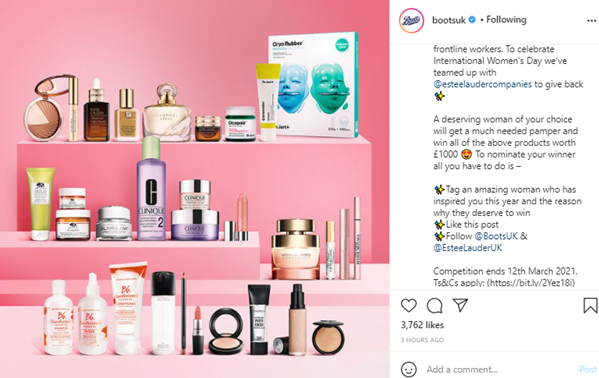 This campaign was effective as it:

If you enjoyed this article, you may enjoy the two published by Contentworks Agency celebrating women in the finance sector. Check them out here:

What’s your favourite Women’s Month campaign or brand? Tweet me @Charli_Says and let me know.